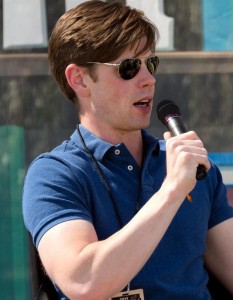 (This rant originally appeared on my Facebook page, but I’m preserving it here so it doesn’t get lost under a series of posts about my latest haircut and/or strong feelings about a new T.V. show.)

That said, if I read one more purported “think piece” about how romance novels “damage people” by setting up unrealistic expectations, I might vomit. This is sexist nonsense that seeks to depict fantasies of brave sexual intimacy as a toxin swimming through a superior landscape of stereotypically male destruction and violence, the strange cultural supremacy of which is largely unchallenged in popular culture. It also furthers a bogus image of the largely female romance novelist population as a bunch of delusional ninnies suffering through a string of broken relationships because of their purported “unrealistic expectations” and “dangerous fantasies”. The majority of successful crime novels streamline the realities of the criminal justice system in an unnatural way to deliver a nice, tidy, bad-guys-go-to-jail resolution, and yet there’s no concerted effort to constantly wage the accusations of “dangerous fantasy” against them with a barrage of sanctimonious, finger-wagging news articles and blog posts. And when was the last time people accused a male crime novelist of harboring secret fantasies of being a serial killer?

All genre fiction works with a baseline of reality and then departs from it to convey difficult emotional truths within a safe space that feels comfortably detached from our everyday lives. Its depictions of human behavior are largely aspirational, no matter what genre you’re talking about. And depending on the genre, the dial is often tuned to one emotional level with a severity that can’t be called “realistic”. Sometimes the notch on the dial is heightened eroticism, sometimes it’s heightened terror. The point is, if you turned the dial in one direction, you don’t really have any business accusing someone who turned the dial in a different direction of producing work that’s “unrealistic”. I realize a rant like this is a strange way to celebrate recognition from my peers, but it’s been an interesting and eye-opening two years in the romance world and I’m not done yet, apparently.