This is the first in a planned 6,578 part (or until I get bored with it) series called CONVERSATIONS WITH MY TRAINER. It’s like Neal Donald Walsch’s famous spiritual meditation CONVERSATIONS WITH GOD only shallow. For the most part, this is an excuse to post really hot photos of my trainer. These photos are an attempt to get my trainer more clients. Getting my trainer more clients is my attempt to console him over the fact that I’m still his client, even after eight years of conversations like the one you’re about to read. (Also, it will occasionally serve as a good excuse to re-post what the gay press referred to as “my nearly-nude selfie“, and my friends now refer to as “my mid-life crisis”. Because, you know, fitness…or whatever.)

My trainer’s name is Adam Sprein. He is straight, married and the father of a newborn baby girl. These three facts will either enhance your sex fantasies about him or detract from them, depending on your level of self esteem. But that’s really none of my business. And as you’ll learn, fitness is about the illusion of self esteem. If you want real self esteem, volunteer at a soup kitchen and stop cheating on your taxes.

What is my business is ensuring that each “conversation” in this series contains an actual, tested and proven fitness tip of some sort. The rest of it will be a lot of sarcastic bullshit and completely fabricated exchanges designed to make me look like I’m not a desperate narcissist. I’ll also do my best to make Adam out to be a total hardass who doesn’t spend half of our sessions talking about Xbox (which he totally does). You’ll know when you’ve reached the actual fitness part of the conversation because I’ll set off that portion of the text with this phrase: THIS IS THE ACTUAL FITNESS PART OF THIS POST.

The hot picture of Adam will come at the end. Initially, I chose this layout because I thought it would force you to read the post. Then I realized that if you’re capable of reading anything, you’ve probably figured out how to scroll down to the bottom of a webpage.

CHRISTOPHER: Are you there, Adam? It’s me, Margaret.

ADAM: Who’s Margaret? Is she actually going to work out today?

CHRISTOPHER: Judy Blume humor is just lost on you, isn’t it?

ADAM: Who’s Judy Blume? Another one of those women who writes gay romances?

CHRISTOPHER: I swear to God…

ADAM: So are we actually going to work out today? Or are you going to give me another thirty-minute lecture on the changing nature of digital publishing?

CHRISTOPHER: You’re not interested in the changing nature of digital publishing? I thought it was important to meet clients on their level.

ADAM: Says the client who keeps telling me to make extra cash by dancing in my underwear at a gay bar.

CHRISTOPHER: This is a city of big dreams, Adam.

CHRISTOPHER: What are those?

CHRISTOPHER: I know what weights are, jackass. I’m asking about the little marks on the bench-press bar. Right here. Is that where I should hang my shoulder bag?

ADAM: No. You should just get a new shoulder bag. I hate that green one.

CHRISTOPHER: I’ll make a note of that. Back to these marks. Is there maybe, like, a TV tray or a cup holder that’s supposed to go here?

ADAM: If there is, we’re not using it. Nine out of your last eleven Facebook posts have been about doughnuts.

CHRISTOPHER: That’s bullshit. They were about my cats.

CHRISTOPHER: Doughnuts are loaded with Omega-3.

ADAM: If by Omega-3, you mean bullshit.

CHRISTOPHER: Bullshit, it turns out, is also loaded wi —

CHRISTOPHER: What are those?

ADAM: That’s the exercise where you lie on a bench and press the weight-bar directly up in the air above your chest while I spot you. If you do it right, which you never do, your chest gets bigger.

CHRISTOPHER: And for our audience at home, what do you mean by spotting?

ADAM: There is no audience at home. We’re at Equinox, one of the best gyms in Los Angeles.

CHRISTOPHER: Indeed. Where else can you watch Paris Hilton walk nose first into a mirrored wall while curling a 5-pound weight?

ADAM: Spotting is where I stand behind the bench in case you need assistance reaching a full extension with both arms. It’s also the part where I turn my face slightly to the side so I don’t get half of your lunch in my face because you thought somewhere in between reps eight and nine was a great time to give me your complete critical analysis of the second season of HOUSE OF CARDS.

CHRISTOPHER: I also like to sing along with the theme music, which is funny because the theme music doesn’t have any lyrics and it’s really kind of dull and —

ADAM: No. Those – quote, un-quote – tricep extensions you did upstairs are what’s embarrassing you. Bench presses! Now!

CHRISTOPHER: OK. So obviously the point is to lie down with my back flat on the bench.

ADAM: No. You do not lie with your back pressed flat to the bench during a bench press. In fact, you should have a slight arch to your upper back, and your chest should be slightly raised. Both of your feet should be planted squarely on the floor on either side of the bench so you can drive through them while you press the bar upward and retract it smoothly and with control. The most important thing to remember about all chest exercises is that if they’re done incorrectly, the stress will be felt in your shoulders and not in your chest. Bad form will result in overdeveloped shoulders and minimal muscle growth in your pectorals. So with each bench press, make sure your upper back is slightly arched, your chest slightly raised and you can actually feel your chest muscles squeezing together as you extend and retract.

CHRISTOPHER: Thanks, Adam. I think that will really helpful to the five people who read this post for the fitness portion.

ADAM: It might also be helpful to my client who’s always bitching about how he doesn’t have a big chest.

CHRISTOPHER: That girl from GLEE?

ADAM: Leave Jenna out of this.

ADAM: I said that eight years ago during our first session. Define “quickly”.

CHRISTOPHER: Since when are you such a wordsmith? And when are you going to finish that website Jenna linked to in her Seventeen Magazine article about you?

CHRISTOPHER: Oh, yeah. Give me some incentive. What will I look like if I do?

ADAM: Well, now that you mention it…. 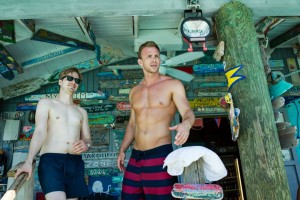 ADAM: I’m leaving. The treadmills are over there.